The mesmerising view of the glimmering sea from the seminar room could easily have ruined the workshop by stealing the attention from the participants. Luckily, the science at the first CRITICS Workshop in Kulhuse, Denmark 4 – 9 September 2016 was engaging enough to keep the participants focussed (most of the time). 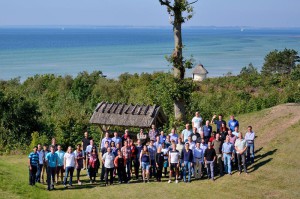 Group photo by the seaside

An outside observer might have wondered what could have brought 70 participants from all across the world and from disciplines as diverse as sociology, ecology and pure mathematics together. The answer and binding glue is “Critical transitions in complex systems”. There is still a long way to understanding sudden and significant changes to highly nonlinear systems in nature, which requires both an applied and theoretical point of view.

Most of the workshop was in the form of talks, with ample of time for discussion. There was a mixture of regular 20-minutes contributed talks and 45-minutes talks from invited speakers divided into themed sessions lasting one quarter to a full day.

After lunch Egbert van Nes gave an overview of applications of early warning signals ranging from marine ecology to balance in humans, after which Martin Rypdal talked about early warnings in systems with many characteristic time scales.

The second half of Monday afternoon was devoted to posters. Those who had brought posters gave two-minute pitches for their posters and then discussions about the posters followed.

Tuesday morning saw a continuation of the climate theme. Several talks concerned prediction and identification of abrupt events in time series. The exception was Peter Imkeller, who talked about estimating coefficients and comparing paleoclimatic models with alpha-stable and fractional noise.

Thereafter, the group got a taste of Danish history when paying a visit to the Viking ship museum and cathedral in the town of Roskilde. In the night, there was a much appreciated dinner at an old wood-decked boat cruising the picturesque Roskilde fjord. 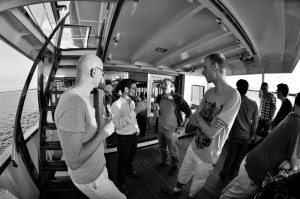 Wednesday morning marked a critical transition, with an abrupt increase in the purity of the mathematics. Martin Rasmussen opened with a talk about bifurcations of set-valued and random dynamical systems, after which more talks on bifurcations in random and nonautonomous dynamical systems followed. In the afternoon, Anna Maria Cherubini talked about stochastic resonance in periodically forced dynamical systems.

Having digested a lot of heavy mathematics, the less purely mathematically oriented participants found respite in a series of climate talks before dinner. Unlike the previous days, those talks were not directly focussed on time series.

Later that night, Michael Hartl and Courtney Quinn arranged a Jeopardy quiz with topics such as “Pokémon”, “Tri-bond” and “From C to shining C”. Jeroen Lamb’s team won, after their closest competitors had bet all their points on the final question seeking the name of a certain Danish queen, and failed.

With fresh minds on Thursday morning, the audience was ready to learn about new results on non-autonomous differential equations from the University of Valladolid group. Ismael Maroto Camarena and Iacopo Longo gave accessible and much appreciated talks on exponential stability for functional state dependent delay equations and equations of Carathéodory type respectively.

Thursday afternoon saw a gradual increase toward applications, with Anthony Quas giving a talk on impediments to mixing in forced dynamical systems and Mary Silber presenting models and data of vegetation patterns in the Horn of Africa. Keith Briggs, currently in the communications industry, introduced himself with a historical note on the influence of Danish on place names in England. On the mathematics side, he presented a colouring problem arising from local bandwidth considerations in communication networks.

We apologise to everyone who was not explicitly mentioned in this summary, and refer those interested to the full programme.