The CRITICS Workshop on Dynamical Systems and Critical Transitions, organized in collaboration with the University of Helsinki, will be held on 4 August, 2017.

The venue for the event is the Exactum building in the Kumpula campus of the University of Helsinki.

The aim of the workshop is to bring together the early career researchers of the CRITICS training network and the Finnish dynamical systems research community. The workshop’s topics are centered around the main objective of the CRITICS ITN, but are not limited to it. The CRITICS program seeks to address the problem of characterizing and predicting the occurrence of sudden changes of behavior in the dynamics of complex systems in nature, technology and society, which are often called critical transitions. More specifically, key objectives include:

The program (featuring abstracts for five of the talks) can be downloaded from the following link: CRITICS Workshop program.

The program features the following speakers:

The workshop is free of charge for all participants, but those who wish to take part in the optional evening program will need to pay a 20 Euro participation fee, which covers the sauna expenses. A certificate of attendance will be provided for all registered participants. In order to register, please send e-mail to k.timperi@imperial.ac.uk. 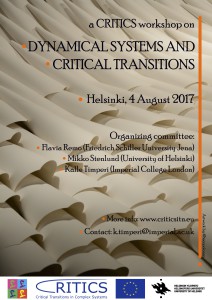